Frequency Analysis of Clays in a Sedimentary Sandstone Sequence

The author's former company in the early 1980s purchased and began to develop a High Polished Stone Value (PSV) quarry in South Wales. The geological sequence was the Carboniferous Pennant Sandstone and altogether about 160 metres vertical thickness of this deposit was to be intercepted by the quarry working. Prior to purchasing the operation a core drilling exercise was carried out involving drilling through the full relevant sequence.

In the process of satisfactorily proving the presence and quality of the required sandstone resources the drilling also identified a number of clay layers of differing thickness and lateral persistence. Setting aside the very thin seatearth type of clays found at intervals in thicknesses of only 1 or 2 centimetres the other clays and shales ranged from several centimetres to around half a metre in thickness. An uneconomically high number of cored boreholes would have been required to be able to attempt to plot the clay layers with any accuracy due to the small scale of their lateral persistency.

A simple probabilistic approach was adopted that satisfactorily identified the higher or lower likelihood of encountering multiple clay layers at certain elevations.

In the working quarry the clays had the potential to cause problems in 3 respects.

The challenge after the core drilling exercise was to design for these in safe quarry faces and advise production colleagues of the likelihood of encountering clays at particular levels.

One substantial clay layer in the sedimentary sequence was confidently expect to be persistent laterally throughout the footprint of the quarry, the others higher up the sequence were lenses of a greater or lesser degree of persistence. Their presence needed to be known or at least their likelihood predicted. Apart from being weak and slippery the clays were seen to 'unload' in engineering terms and become fissile within days of being released from confining pressure of the rock mass.

A number of techniques were applied in mitigation of stability concerns:- some of the clays when exposed could then be covered by loose rock to reduce their exposure to weather and buttress the face; increased bench widths would be applied where space permitted; bench levels were selected such that the thicker clays or shales would be at the base of quarry faces so that a protective toa of clay might be left in place after removal of blasted rock, or covering and buttressing could be undertaken as above; and for restoration purposes when faces were in their final positions certain faces would be prioritised for backstowing with lump rock, rejects or unsold rock.

On the grounds that the presence of clay would reflect the sedimentary environment of the time, and the available source material, it seemed reasonable to try and correlate the amount of clay in the core with the position in the stratigraphic column.

A frequency analysis was carried out of the identified clay occurrences plotted against elevation AOD. The host strata are to all intents and purposes flat lying with a dip of only a few degrees. A significant clay was deemed to be 2 cms in thickness. The frequency count was carried out at vertical intervals of 10 metres and the 5 metres, followed by a count of the occurrence of thicker clays more than 10 centimetres in thickness within the 5 metre vertical interval. Simple counts were plotted against level AOD.

The vertical interval selected is critical but would need to be derived empirically for each quarry if applied elsewhere. If the interval is too small then clustering of results would not be apparent - there would either be clays or no clays in each interval; too large and the significance of say a single clay at one level is missed in comparison with multiple clusters, but that might be the clay that creates a hazard. Data needs to have an obvious pattern to get operational but-in and it must be considered against the typical quarry scale production faces of around 15 metres in height. A range of vertical intervals of say 5, 10 and 15 metres is suggested as a good place to start and through iteration it might emerge that the optimum is 8 metres say.

In this case the analysis at 10 metres (Fig. 1) showed 2 populations, one in the range from 160 to 200 metres AOD - equivalent to 3 typical quarry benches, and one in the range 230 to 260 metres AOD. The first population showed a greater occurrence of clays within consecutive intervals and a higher overall count than the population further up the succession. This was helpful in its own right in suggesting where quarry benches should be designed to go. 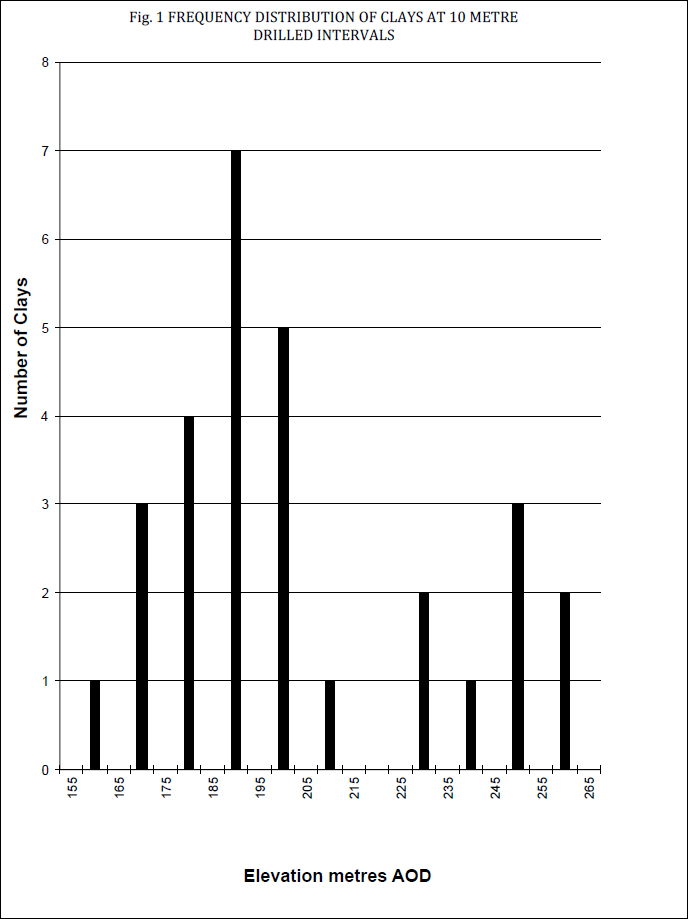 The analysis at 5 metres (Fig 2) unsurprisingly showed a similar pattern but the population between 255 and 260 metres could be seen to comprise 2 populations of data itself. This confirmed the frequency of clay layers in part of the succession but also gave a useful steer as to the design bench levels in the upper parts. 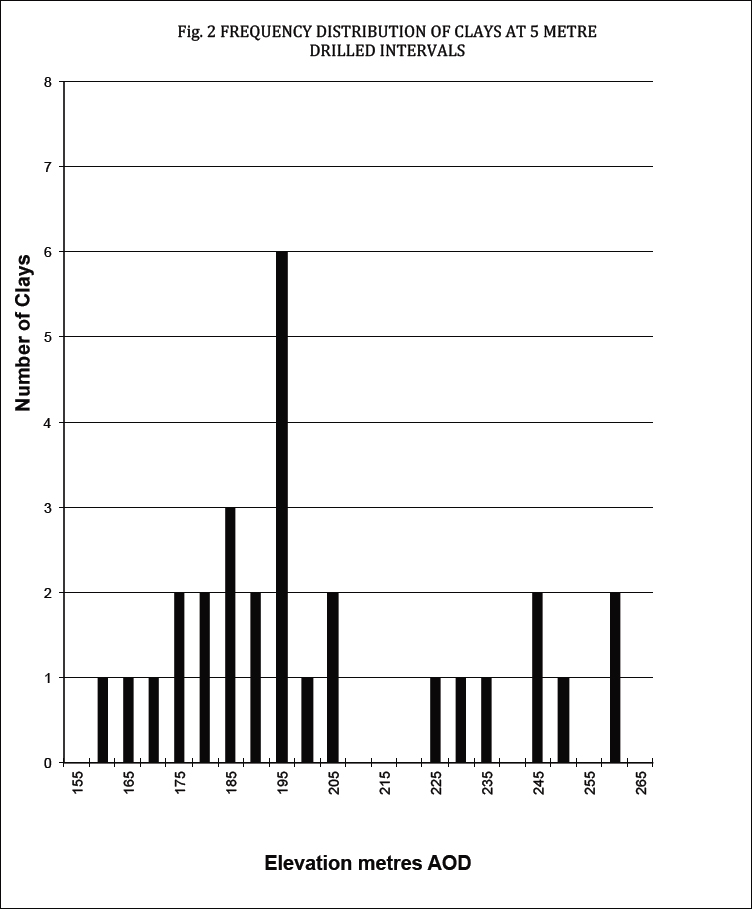 The third iteration counting clays of 10 centimetres thickness or more (Fig 3) further refined the data populations. The 160 to 200 metre population reduced in vertical range to 155 to 195 metres and the overall count reduced significantly. The population further up the succession remained similar although the very highest clay does not appear whilst a significant 3 clays at 10 centimetre thickness or more are concentrated at one level. 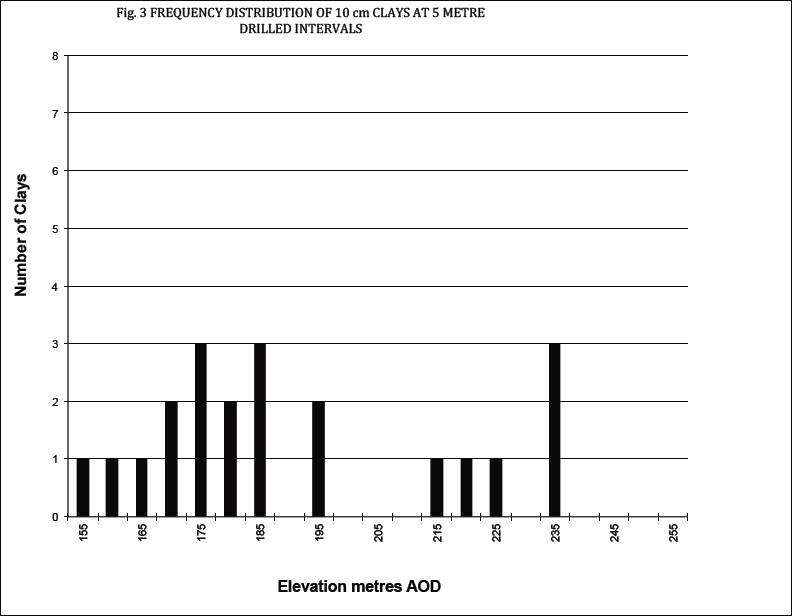 These predictions turned out to be acceptably accurate and for many years the quarry production scheduling and site excavation was able to be informed by the predictions.

The benefits of this types of analysis, perhaps only applicable in a sedimentary environment, are in safety related to face stability and product quality related to avoiding clay in the blast pile. Such knowledge, or at least an awareness of probability, can enable selective quarrying to take place where sufficient faces are available.

For many years, since minerals planning was formalised through a Minerals Local Plan based system in the early 1980s, County Councils as mineral planning authorities have carried a general responsibility to try and avoid mineral resources - mainly bulk materials such as aggregates and clays - from being sterilised, or put beyond use, by permanent surface development.

In the author's experience this responsibility was discharged fairly patchily in the distant past but following the introduction of the National Planning Policy Framework (NPPF) in 2012 many Counties are applying sterilisation policies with greater vigour.

It is a simple truism that minerals can only be worked where they lie, and quarries for sand and gravel or for crushed rock need landsearch activity to identify mineral bearing land for greenfield developments or extensions to existing operations.

Read more about - Aggregates Landsearch - Then and Now - Changing practices in land search for aggregates and other construction materials...

The UK Government is aware of risks that are posed by extreme weather events to infrastructure such as roads, railways, power and communications systems, and consultations have taken place with various industrial sectors. The minerals industry as represented by producers of solid, non-energy, industrial minerals and construction materials has a voice in that consultation.

It is a privilege to be able to respond on behalf of the Mineral Industry Research Organisation to DEFRA's Review of the Sustainability Fund Research Projects. MIRO and English Heritage have selected a most interesting venue for this launch and The Wellington Arch is perhaps slightly more relevant than many people might at first think.

If you would like further information then please contact us on +44 (0)1462 743 005, email us at info@wmml.co.uk or fill in our contact form and we will be in touch as soon as possible.

Consultancy and Services for the Dry Bulk Minerals Sector